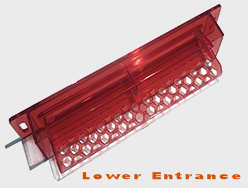 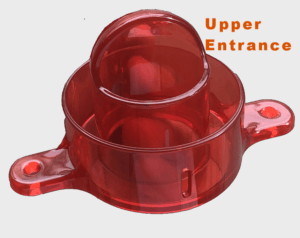 The Guardian Beehive Entrance was designed to thwart those pesky hive beetles from entering a Beehive.
The design creates a ledge or groove that the hive beetle will follow but it will not lead it to the hive entrance.
The extended time that it takes to enter the hive puts the beetle in jeopardy of the bees noticing it and taking action.

The bright red color of the gate also acts as a deterrent to the hive beetle.

I’ve been using this product for the last two years and I have to say it has been very effective.  I have even had the opportunity to watch a beetle try to get in.  Even after 5 minutes it still could not figure it out, and was chased away multiple times by the bees.    I recently had a visiting Beekeeper inquire to what these different looking entrance were.  They have never heard of them.   So I decided to do a little more research and contact their creator: Mike Munson.  This is what he had to say….

” The Guardian BeeHive Entrance (BHE) was created out of necessity. As a new beekeeper, I had a few hives struggling from and had lost a few hives to small hive beetles. I desperately wanted to figure out how to best protect my bees. After studying the behavior of both the small hive beetles and the bees, I came up with the Guardian BHE. I had noticed that when the beetles tried to enter the hive, they could not hover, so that’s where I started. The prototype was created and then I began testing.

Beetle counts were taken before adding the Guardian to the hive entries. Then over time, counts were made and safety assessed.  It became apparent that the beetle counts went down quickly and that the bees were able to acclimate to the entry and to more easily do their job…protect the entrance to the hive.  The next step was to get the prototypes into the hands of beekeepers all over the country. Many samples were sent out and contacts made through social media via beekeepers’ pages. The positive comments of successful usage began to pour in! As comments continued, so did the requests to purchase and try the Guardian.

To bring Guardian to market, I attempted a Go Fund Me account. However, this was slow to jumpstart.  Believing in the efficacy of the product, I knew I had to bring the product to market myself.
The first big break came when Barnyard Bees did a review of the Guardian BHE on their Facebook page. Thanks to the positive reviews continuing to post and come in, sales increased consistently. We began to see more and more posts on various beekeeper’s pages with pictures of their hives with the red Guardian BHE attached to their hives.”

My experience has been good, I have eradicated the problem of hive beetle infestation. That being said, I have no problem in recommending them.  It’s also  great to support the product of a fellow Beekeeper.  So if you are having a hard time dealing with hive beetles, get rid of the oil traps and Swiffer pads if you want and  then click the button below.