What Is A Honey Bee Swarm?

A honey bee hive is  a wonderous and complicated place. Every bee has their assignment.  To answer the question above you’ll need to know just a little bit more of what goes on in a beehive.

Worker bee – The worker bees are all females and make up a majority of the hive.  Except for some extreme cases, a worker bee does not lay eggs.  And in those rare occasion that one of the worker bees starts to lay eggs, they are sterile , so all the eggs will hatch as males.   The worker bee is the heart and soul of the hive community.  They wear different hats during the phases of their life. Staring off as nursemaid bees soon after they are born.  They will take on the role of hive sentry after they have grown some and then eventually take on their final role as a forager.  Flying from the nest to find pollen and nectar along with other trace minerals.  There lifespan is usually 5- 8 weeks due to their wings giving out and they can no longer fly back to the hive. If they did not need to fly, they could actually live much longer.

The Drone – Otherwise known as a male bee,  is larger than the worker bee with big eyes and no bite.  That is to say, they don’t have a stinger.  They hang around the hive all day and eat.  They are waiting for one thing and one thing only:  a chance to mate with a queen bee on her virgin mating flight.  Now this may sound like the good life for a lot of guys reading this, but their is a catch….   If one of the drones is lucky enough to be one of the 15 or so to mate with a virgin queen, he will not leave the encounter alive.  After attaching to the queen, they are disemboweled essentially with their sexual organ remaining with they queen when they separate.  The next drone to mate with the queen  will dislodge the previous drone’s endophallus and so so on and so on until the queen has a lifetime of sperm stored to help make her many hundreds to thousands of eggs fertile.

The Queen. – In most alien or monster movies, the queen is all that.  She is the brains and strength of the hive.  Kill the queen in the movie and everything else will die without her…   Kill the queen of a honey bee hive and the hive will immediately begin to grow a new queen and continue to survive as they always have until the new queen hatches.

Now the queen is undeniably vital to a hive.  She spends her entire lifetime in the hive laying eggs and passing on the genetic material that has been passed on to her.  Except for the mating flight, she does not leave the hive.  We’ll that’s not entirely true either, but we’ll get to that in a little bit.  A queen is so intent on doing nothing but laying eggs, that her entourage of worker bees hand feeds her along the way.  The hive colony notices everything about the queen.  How fast she is laying, what her pattern of laying is and other signs.  As soon as the colony senses something is not optimal with the queen or the hive is running out of room for her to place eggs, they start to make preparations to ensure the hive’s future sustainability.
They will create new queen cups which are oversized wax cells that can fit extra food and royal jelly in the cell so the larva will not turn out as a worker bee or drone but emerge as a new queen.  Now if the old queen hangs around to congratulate the new queen,  there’s going to be a smackdown.  So the older queen gets together with some of the hive  and tells them “Let’s leave this two bit rat trap and find another place to live”, or something like that…

The SWARM –  And now we get to the answer to the question.  Are you still awake?   The departure of the old queen with sometimes up to half of the established worker bees and some of the drones is what forms on the tree branch or playground equipment (where ever they decide to rest).  Before leaving the old hive, the workers will raid the cupboards, taking as much honey with them as they can.  They will leave the hive and hover for a bit before finally moving off to find a space to rest while some of the bees leave to scout out a new place for a hive. 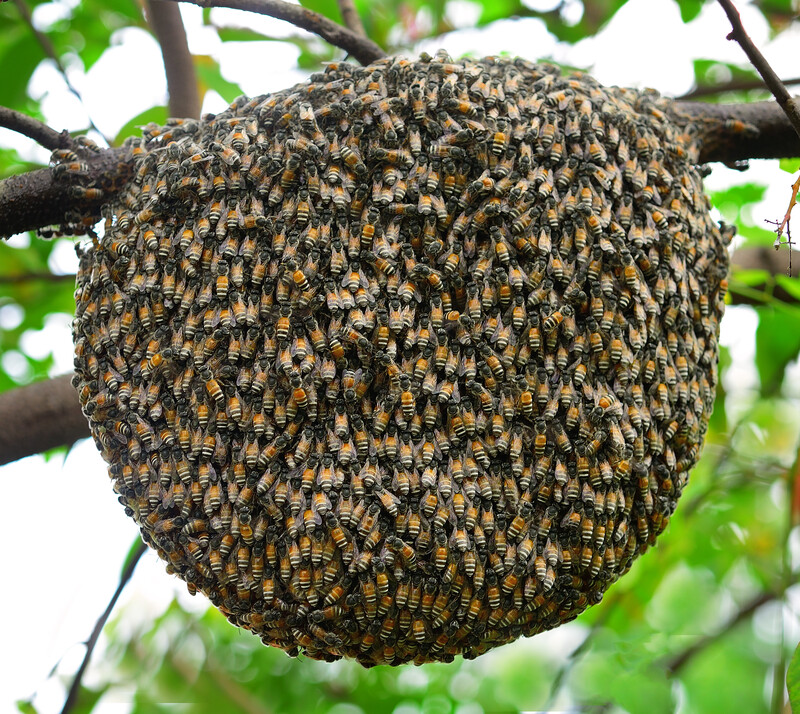 So that cute little structure you see that looks like a bee balloon stuck in a tree, is actually all the worker bees that have just left a hive.  The queen is smack dab in the middle.  They will patiently wait until the scout comes back and provides information on a possible new hive location  At this point the tight cluster will loosen up, rise into the sky and disappear within a minute or two.  Unfortunately, the odds are against them surviving in their new digs and that’s why they need you help and the purpose of this web site.

Whether it’s pesticides, Varroa mites or any other of the numerous challenges facing honey bees today, we have to help them survive.  Our health and agriculture depends on them.
So if you get a chance to encounter a swarm, do your part and find a local beekeeper here and let them know where the swarm is.  That colony of honeybees has a significantly greater chance of surviving in a Beekeepers care.