WHAT’S KILLING ALL THE HONEY BEES ?

Lately it’s almost becoming easier to ask what isn’t killing the honey bees today.  The number of feral (wild) honey bee colonies is dwindling every year.  There are a number of different diseases and viruses out there that have plagued bees and other insects, but if we had to dwindle it down to two answers, then these would be:

The Varroa Destructor is an external mite that attaches to honey bees and their larva. Belonging to the arachnid family it will transmit disease and weakens the bees or larva as it feeds on the blood of it’s host

The varroa mite migrated to the United States from Asia where it was first recorded as a mite in Java in the early 1900’s.  With the event of  increasing international shipping, the mites likely became stowaways and were soon found in Japan and South American countries.  They eventually made it to North America where the honey bees were caught completely unaware of what these new invaders were or what damaged they could cause to the health of the hive.  Their Asian counterparts had begun to learn hygiene techniques that would render the mites useless.  They will pick the mites off other bees and chew of the mites legs.  The mite could no longer attach to a bee, leading to it’s eventual death.  Although this learned hygiene has not caught on completely here in the states, there are some honey bee breeds or colonies that have begun to show these traits.  Beekeepers have been diligently working to promote these traits in new hives or colonies.

The mites have learned to sneak into the hive by attaching to a honey bee that is foraging.  Once in the hive they will search for the frames that have  young  or uncapped brood (Larvae).  The mite will try to lay eggs in  a cell with the bee  larva before it is capped.  Once capped, the hatched mites  can hide for the whole growing cycle, feeding on the young bee until if breaks out or hatches. 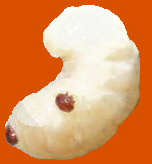 The mites particularly like to invade the larger drone cells where more eggs can be placed.  This is why one method of trying to control them is putting in specific frames called Drone frames that will encourage the queen to only place drones in these larger cells.  After the cells are capped the frame is taken out and usually frozen  or the cells destroyed to kill the varroa eggs

Beekeepers have developed other ways to try to keep the varroa might count down to a manageable level.  If they don’t, many of the colonies would not make it over the cold season or during times when pollen and nectar flow are decreased.  The term “Colony Collapse” is often used when a beekeeper finds a hive empty or their bees dead.  The major cause of colony collapse is thought to be the varroa mite.
There is an old saying ” Ask 10 Beekeepers the same question and you will get 10 different answers”  That may be due to the fact that Beekeepers  may be first generational or carrying the craft with them from their grandfather.  If the bees make it and are healthy, they are doing something right..

In the beginning, there were no honey bees in North America.  They were brought here by travelers.  Multiple strains of honey bees  were brought to the US.  And each strain had it’s own unique characteristics and tolerances. But all of them can fall victim to the varroa mite.

Some Beekeepers feel we should promote natural techniques.  No substances that are not normally found in a hive.  The hope is to let the bees learn to control pests and disease on their own.  Sort of like the Asian bees learned to control the varroa mite better than the European bees.  This  trait should eventually occur here in the states but what will be the costs?  How many colonies can we endure to lose before this happens.  It’s tricky, so some continue to rely on human ingenuity to assist the honey bees and help them fight off any danger.  Does this aid slow down the development of a natural or learned defense?  Possibly, but we need bees to stay alive now so  Beekeepers make that assessment and respond according to their beliefs and what the feel is best for their “girls”

Mr. Jones sure does like his roses and flowers.  Throughout  the season he makes sure to protect them by applying  pesticides he bough at the D.I.Y big box store.  They do the job though.  Any bug that even tries to land on or take a bite out of his plants is a goner.
Unfortuneately any honey bee that lands on that plant is also a goner and to make matters worse, if they make it back to the hive, they will likely poison the others.  Is Mr. Jones killing Honey bees on purpose?  Not likely.  Then what do you expect him to do?  He has the right to keep his garden nice doesn’t he?   Of course he does  but does he know that there are pesticide options that are less or better yet, not harmful to honey bees?

I’m guessing if he did, he wood make the effort to save the honey bees.  The fine folks at the Pollinator Stewardship Council have  been championing the fight against pesticides that harm honey bees.  They have gone up against the big boy manufactures and won battles.  But best of all, they are bringing this issue to the public eye.  I could not write a brief synopsis that would do any justice to this issue, so I would ask that you click their logo and visit their site, they are the experts in this matter.  Learn more about what you can do and support their fine work to save Honey Bees